This requires a bit of an explanation:

A long while back, a group of friends and I came to the realization that Rodney would make a fantastic owl, even going so far as to create a tumblr for this premise. Beckersher is the main poster for the owl!verse.

At first the back story was simple: Due to Ancient technology, Rodney is transformed into an owl for an unspecified amount of time. Through more ancient tech, he communicates with the others via their radios. The story grew from there: Rodney goes on missions as an owl, and eventually starts bringing home little owlets - whether they follow him through the gate or he purposely rescues them - turning Atlantis into a safe haven for birds of the Pegasus Galaxy. They sort of become Rodney's babies, and he gives them a scientific names, while John gives them...less stuffy names. Some of the owls are assigned to certain gate teams, even, but all have a distinct personality.

This fic takes place two years after Rodney was first turned into an owl. Rodney is back to being human and on missions - and once again he's caught the attention of an animal, although this time it's not an owl...

There is now a masterlist!

My love for this 'series knows no bound. 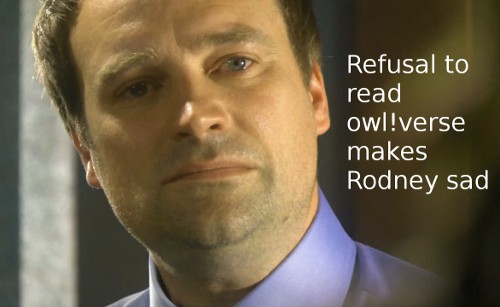 shhh just go with it

*ETA: That list was also just a selection of what's out there. There's a lot more one-liners and quotes directly from the show, and then there's Everything Is Owl!verse (Even When It's Not)...
Collapse